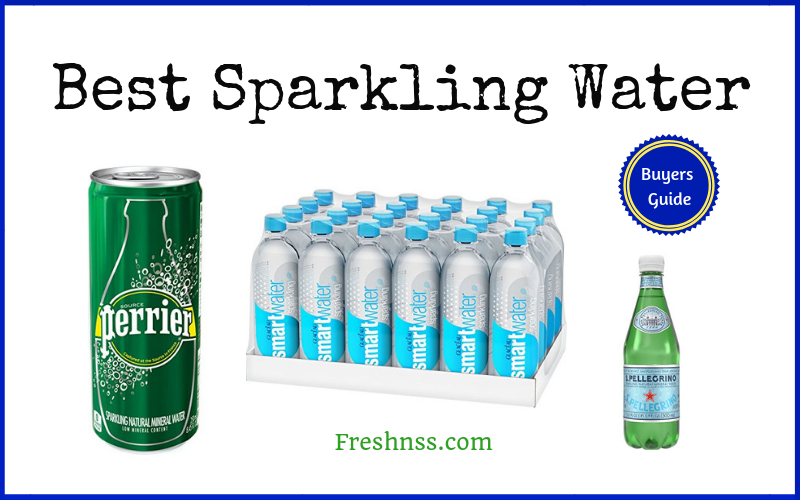 Sipping one of the best sparkling water options available is a healthier alternative to soda and other unhealthy carbonated soft drinks. It’s can be an unpleasantly rough road to stray away from the sugar-overloaded beverages that fill the shelves in the grocery store. But how do you satisfy the need for something bubbly while sticking to a wellness based lifestyle? We’ve researched to determine the top-rated carbonated water, seltzer, club soda and sparkling water drinks on the market, as well as a couple to avoid.

Reviews of the 5 Best Sparkling Water, Carbonated Water, Seltzer, and Club Sodas, Plus 2 to Avoid 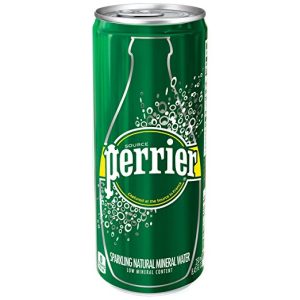 This is the best sparkling water you probably most expected to see on this list and it takes the top spot. It’s fancy, crisp, comes in wonderful glass bottles or perfectly sized cans, and I could keep going. But why does it take the top spot?

Perrier’s bubbliness is far less than many the other carbonated water options. As one of the best sparkling water, it is at a perfect level of fizz. We’ve found that overly carbonated waters and club sodas have an overwhelming carbonation, whereas sparking waters like Perrier favor a smoother carbonation. It has a mineral taste to it that doesn’t bite, and the spring water resource is easily detectable.

If you see the classic green bottle, Perrier is worth a try and a great introduction for anyone new to choosing the best sparkling waters. It’s middle of the road in every way and this is what draws so many people in! 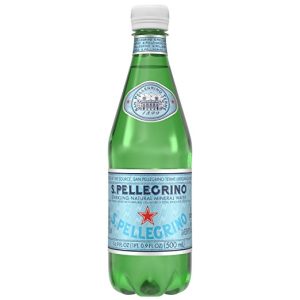 San Pellegrino is among the sparkling water that lets the mineral taste take over with slow rolling, smooth carbonation. Pellegrino marks itself apart as a mineral water that has sodium. It pulls in 10mg of sodium which is why it sits in the number 2 spot instead of taking top rank. Based on taste alone it is the top choice. However, because of the sodium addition, it isn’t a prime choice for several diets.

We know there are a ton of diet conscious people out there who avoid soda because of the high sodium content. Although 10mg isn’t high, it’s easier to keep the sodium from beverages at zero. 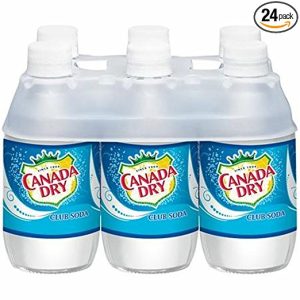 The grocery store favorite club soda’s everywhere, Canada Dry. It’s classic logo and taste are undeniably a favorite of many soda drinkers and sparkling water fans. In other words, this is the place to start if you’re trying to work soda out of your everyday habits. Get all the carbonation with none of the sugar.

With the club soda title, you can expect and would be completely correct, that Canada Dry is much closer to soda than the mineral waters listed above in this list. It is far bubblier, nearly Coke level and you’ll find it in the classic 2-liter plastic bottles or standard soda cans. The great thing about Canada Dry compared to other club soda’s is that it doesn’t have that distinct flavor that reminds you of being sick and needing something to soothe your stomach.

Canada Dry is a great option for parties too as it mixes well in a few cocktails. It’s also far more budget-friendly than the other sparkling water’s here. 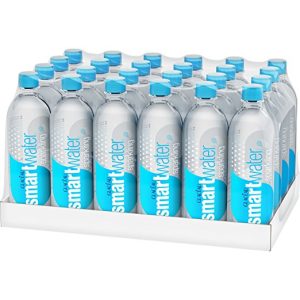 Most recent on the sparkling water market is SmartWater Sparkling. It keeps the classic SmartWater look and clean taste. However, it deviates from the standard sparkling water process which is what makes it taste exceptionally great.

Instead of carbonated spring water, SmartWater sticks with its tried and true method. Smartwater Sparkling is vapor distilled, fully carbonated and filled with electrolytes. You don’t have the mineral taste here, so this is a great option for anyone who doesn’t really like Pellegrino or Perrier. Instead, you get a welcoming tang with each burst of bubbles. 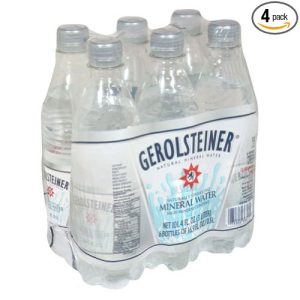 Gerolsteiner Naturally Sparkling Mineral Water is a healthy sparkling water choice as it is naturally carbonated and from mineral-rich spring water. The cult following that comes with Gerolsteiner isn’t matched by any other mineral water which is impressive because many people latch onto one brand and stick with it.

However, Gerolsteiner falls so low on our list for a few reasons. Although it is totally worth it, this is hands down the priciest sparkling water on our list. Then there’s the fall back that the minerally taste combined with the light mouthfeel is an acquired taste. It’s not for everyone, however. 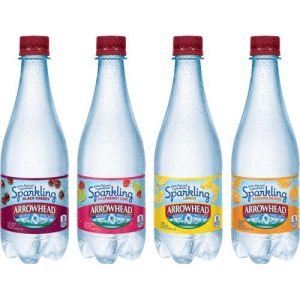 It’s a cheap option, but there are a lot of other carbonated waters, seltzer waters, sparkling waters, and club sodas that are better tasting. Taste rules out and Arrowhead disappoints in this department overall. The flavors are only there slightly making it not even worth picking them up over the original un-flavored version. 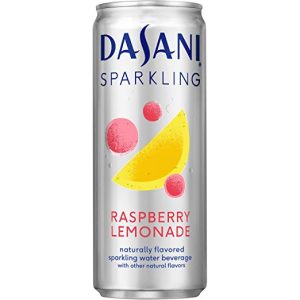 The multiple flavors of Dasani Sparkling Water all disappoint. But, the Raspberry Lemonade flavor has a distinctively bad taste and it lingers. We’re not alone here, a lot of soda water lovers have reported the Dasani flavors as deceiving.

They’re packaged in cute, enticing, perfectly sized cans only to have you drinking a soda after to get the taste out of your mouth. Many have equated it to putting an Alka seltzer in watered down lemonade. There is virtually no mineral taste, and the bubbles are harsh. Overall these little Dasani’s fail. 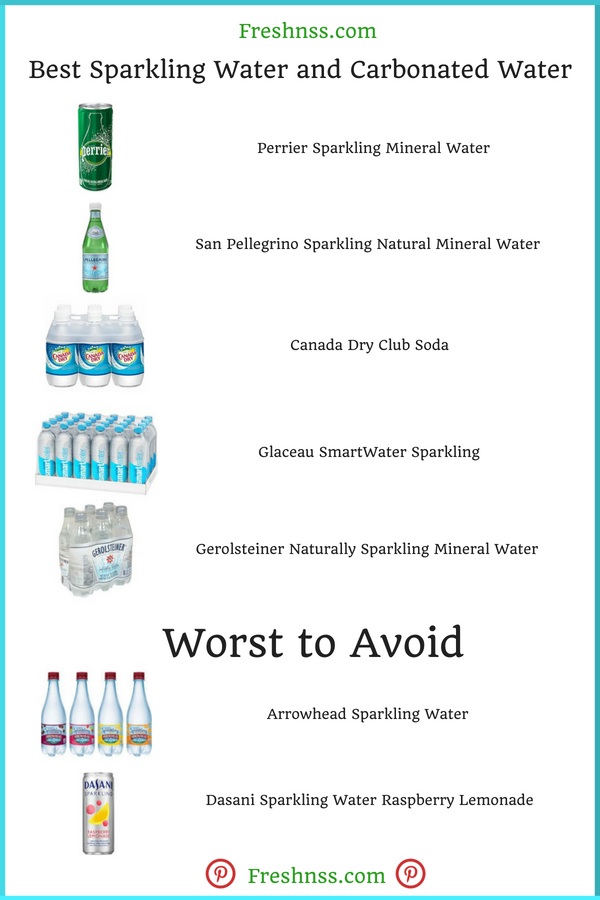 2020 Buyers Guide to the Best Sparkling Water and More:

Each of the reviewed beverages is tried, tested, and a favorite of many who crave drinks that fizz!

See how each measured up for us including the one’s we wouldn’t recommend wasting calories on?

When you consider the best sparkling water on the market, the number of options can quickly overwhelm even for a well-versed carbonated water drinker.

What is the difference between club soda, sparkling water, and seltzer? How can you know a good carbonated water from a bad one before you taste it?

Well, even with the list above it is difficult to know if you’ll like something or not without tasting it for yourself. However, we have some key tips to keep in mind to find the carbonated water you’ll like most!

Is it OK to Drink Sparkling Water? What Makes it a Healthy Beverage Option?

This question has a two-sided answer. Yes, it is a healthy beverage option, but like all things, if you drink too much it loses many of its benefits. It is also not an alkaline or PH neutral drink although it has no sodium or sugar.

So far, Perrier stands out as the healthiest sparkling water as it is naturally carbonated and spring mineral water with minimal processing.

Overall, the best carbonated water and sparkling water is a healthy alternative to most beverage choices, like soda. The best sparkling water for you is something you’ll find from testing a few out. The good news is, this won’t break the bank or your waistline. And sparkling water makers or soda siphons are an even more cost-effective way to satisfy your craving! Keep in mind, not all carbonated are made equal in terms of bubbliness, flavor or mouthfeel. Each one has a bit of variance in what they feature, and everyone’s taste preferences differ.

Hi there, I'm Ricky! Welcome to Freshss where you'll find fresh ideas everywhere you drink or eat in 2020. Learn More …